Golf without any doubt sets the adrenaline pumping for tens and thousands of fans across the world. Though there are many countries where the sport is extremely popular, there are quite a few reasons to believe that the USA is one country where there is a big following for golf.

This is because of a number of reasons. It has produced some of the legends of the sport including the iconic Tiger Woods. Further, there are several small, medium, big and mega golfing tournaments that keep happening across the country.

In this specific article, we will have a look at the upcoming US PGA Golf Tour and learn more about the various favorites and movers and shakers if one would like to call them that way.

The Field Is Quite Big

Since the US PGA tour is one of the most prestigious tournaments in the world, there is no denying the fact that it attracts the top talents from across the world.

Hence, the golf fans can be sure that they will have a dazzling list of players, who on their given day can defeat each one of them through their sheer skill and proven track record. 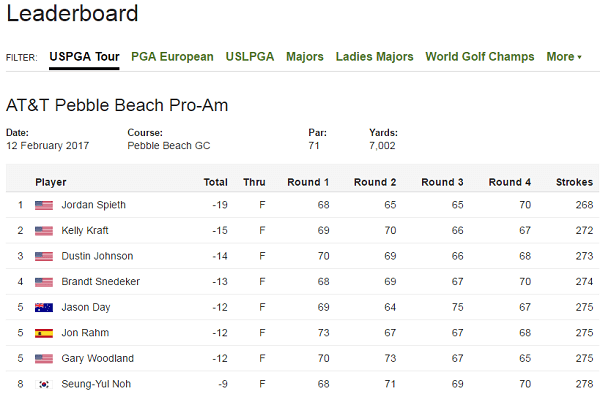 Hence, when it comes to betting and gambling, there are hardly any rooms for errors, and at times one may have no other option but to go in for some guesswork and perhaps even depend to some extent on lady luck.

The tournament is scheduled to take place in August at Quail Hollow, which without any doubt needs no introduction for golf fans, punters, and bookmakers.

It is the place where the Wells Forgo Championship has been hosted ever since its inception in 2003. Therefore it is quite likely that many players will be aware of the course, the weather conditions, and other such critical attributes.

The Players to Lookout For

As mentioned above the field is wide open with some of the best name expected to take part in the tournament.

The actual list of participants is still in its initial stages, and therefore it might take some time before we can predict the outcome of the players who are supposed to take part in the tournament.

However, here going by the top players’ list and hoping that most of them would be taking part in the prestigious US PGA Golf Tour for 2017, let us try and look at a few names that might be able to create ripples.

There is no denying the fact, that Jason Day and contemporary golf are complementary to one another. Hence, when we talk about the upcoming PGA golf tour, there is no doubt that the name of Jason Day will be talked about.

He is without any doubt the top ranked players as far as 2016 is concerned and as per the FedEx rank; he is sixth in the rank.

He has performed reasonably well in US circuits, and therefore he stands a reasonably good chance. Further, the odds of various bookmakers also are not much against him.

With some overall points, average 9.83 there is little doubt that the name of Rory McIlroy is a name that evokes odd and admiration.

Hence, he might stand a good chance as far as the next edition of 2017 PGA tour is concerned. Though Jimmy Walker might have done well last year, if he plays this year, he is certainly up against some of the best names and Rory McIlroy is one such name.

Many bookmakers are ready to give him a highly favorable odd of 7/1, and therefore he needs to be watched closely.

Aged thirty-seven, many might consider Jimmy Walker to be a player with outside chance as far as this year’s US PGA tour is concerned. However, it would be wrong to write him off without a closer look at his potentials.

The very fact, that he performed quite well in the last years’ PGA tournament quite creditably is a favorable position for him to start off. This perhaps explains the favorable odd which he has in his favor.

Being fourth on the overall list, there is no denying the fact that Henrik Stenson from Sweden is a big name to reckon with as far as the next year’s PGA tournaments in the USA is concerned.

Though relatively new players might have won the match in the last year, many believe that Henrik with his knowledge of the US circuits could be a strong favorite and a dark horse who can perhaps take others by surprise.

The fact is buttressed by the fact, that there are many bookmakers who are ready to give him some good and favorable odds, which again a point which must not be ignored.

Though nothing significant has been achieved by Tiger Woods, there is no doubt that he continues to awe and inspire thousands of fans.

However, as far as bookmakers, punters and bettors are concerned, there are reasons to believe that it is all over bar the shouting.

Who knows, he might draw some sudden inspiration, and this could go a long way in making him a rank outsider to win one of the many PGA tournaments lined up for 2017.

The above are just a few names which we have been able to talk about in this article. However, this is a small list, and there are many others who are also worth mention as far as the current years’ tournament is concerned.

There are many names like Hideki Matsuyama, Alex Noren, Dustin Johnson and others who also on their days can make things difficult for the so-called favorites at all points of time.

Hence, for a better perspective it would be advisable to look up all the major bookmakers, and take feedback from past performances and also from expert opinions of punters and bettors.